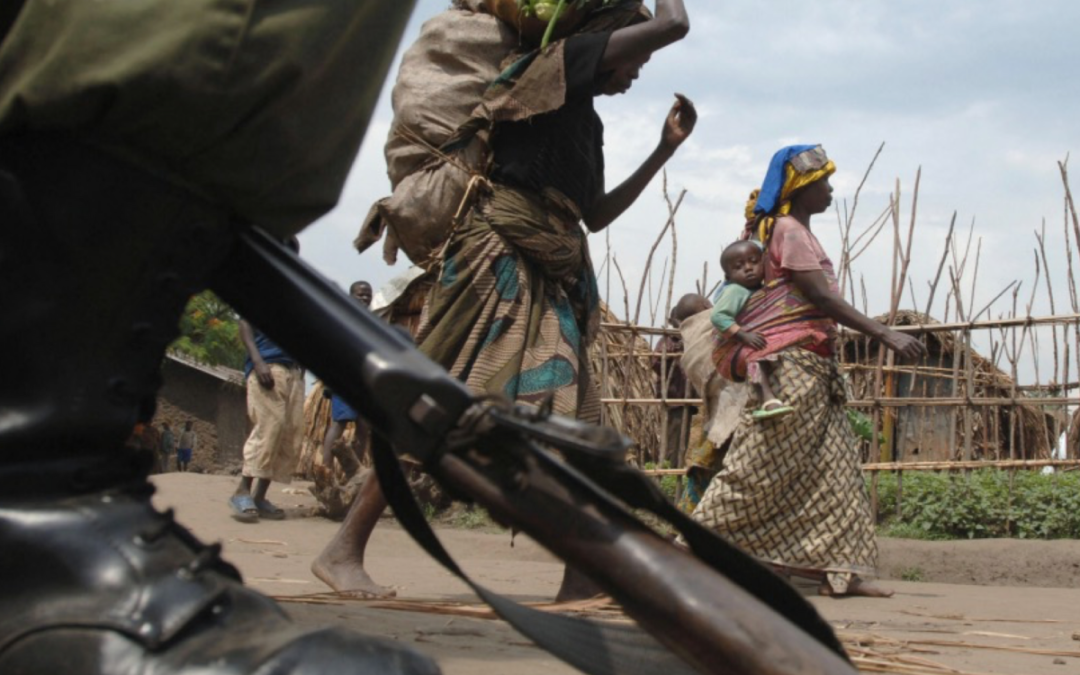 The government wouldn’t stop a powerful politician from allegedly gang-raping 50 young girls — until it got a little bad press.

It was in a sickly green, fluorescent-lit meeting room in Bukavu, in the eastern Democratic Republic of the Congo, a couple of years ago that someone whispered to me that babies were being gang-raped in a nearby town. I’d been there for many hours listening to the stories of rape survivors for an unrelated article, when a researcher at an international nongovernmental organization described a few details. “They are very tiny. Maybe three and four years old,” she said. “We don’t know how the men are getting into the houses, but they take the girls and no one else wakes up.” The attacks had begun six months prior, in June 2013, and while this is a country rife with sexual violence, the cases were rattling people. These were babies.

The town where the rapes were happening, Kavumu, is devastatingly poor, even by Congolese standards. Residents live in mud-and-stick or wood-slat shacks. Children often sleep crowded into one or two beds in a single room. It is not uncommon for eight youngsters to share such a space. So when men started stealing tiny girls in the dead of night, it was a mystery how no one woke up. Rumors swirled that the attacks were related to witchcraft — that the blood of these virgin girls was being used to fortify the rapists before battle. People said the perpetrators sprinkled a kind of magic sleeping powder over the houses of their victims while they carried out the abductions.

During the next year, the number of cases increased. By the time I wrote about them for Foreign Policy in April 2015, Panzi Hospital — Bukavu’s famous center for victims of sexual violence — had done what the hospital’s medical director, Denis Mukwege, described as “heavy surgery” on 35 little girls. But still the ongoing attacks were being treated as individual cases, as though they were isolated events. As I was researching the story, I made several inquiries to top Congolese officials asking what the government planned to do to stop the crimes. Days before publication, the government hastily announced that it would launch a “national investigation” into the rapes in Kavumu. Good news, I thought — except nothing came of it for more than a year.

I tried to follow up on how this “national investigation” was going, but the government — and specifically the office of Jeanine Mabunda, the country’s special representative on sexual violence — remained tight-lipped. After six months of making inquiries, I found out through Congolese sources that a single investigator had been put on the cases, but that he had not been given funding, training, or any other resources from Kinshasa. The former head of the North Kivu Sexual Violence Unit, Police Col. David Bodeli, had been called to the capital and told to solve the crimes — but that was it.

So I decided to go back to Congo to figure out what exactly was going on. The day I arrived in Bukavu in late December, a 3-year-old girl had landed at Panzi, having been abducted and gang-raped the night before. She couldn’t walk because of the pain. In the same row of hospital beds in the sexual violence ward were two more girls who had been brought in the week before: One was five years old, and the other was six.

Over the following days, I talked to doctors, psychologists, community organizers, lawyers, civil society advocates, government officials, and waiters in restaurants — basically anyone in and around Bukavu and Kavumu who might know something about these crimes. I met dozens of parents and nine more girls who had been raped. With flat, traumatized expressions and choked-up voices, they told me of their ongoing terror and how they no longer slept.

This was a town in psychological ruin.

By the time I left Congo a couple of weeks later, however, I felt confident that there had been significant progress toward helping the victims. Coopera, a Spanish NGO, and Panzi Hospital were both providing the girls and their parents with counseling that the parents told me was helpful. There also appeared to be progress toward stopping the attacks: A task force made up of various U.N. offices, NGOs, and Panzi was working closely with Bodeli and providing him with resources to aid his investigation. And I had a suspect: Batumike Rugimbanya, a parliamentarian from the CCU Party (which is part of an alliance with President Joseph Kabila’s ruling PPRD Party) who appeared to have created a local militia under his own leadership. A source close to the government’s investigation also told me he believed Rugimbanya to be the ringleader of the group carrying out the attacks. Arrests, I believed, would come very soon.

That was at the beginning of January. Over the next five months, four more children were raped and Rugimbanya continued to walk free. All together, about 50 girls, aged 8 months to 11 years, had been brutally attacked. Two more had died from their injuries. Rather than wait any longer, I decided to write an op-ed in the Guardian asking why the Congolese government had not moved to arrest their suspect.

Then on Tuesday morning, 12 hours after my op-ed was published — and three years after the attacks began — the alleged ringleader was suddenly arrested along with 67 of his militiamen, who had clashed occasionally with the Congolese army. It was a swift early-morning raid involving 120 Congolese soldiers. No shots were fired, Bodeli told me by text message on Wednesday. The only man who had a gun, he said, was Rugimbanya.

These arrests are certainly a step in the right direction. But the real test of the government’s commitment to stopping the rapes in Kavumu — and others like them elsewhere in the country — is what comes next.

Justice in Congo is notoriously nonfunctional, especially for its thousands of rape victims — not one of whom has been compensated despite court orders to pay out damages. Yet over the past few months, the task force working to stop the rapes in Kavumu managed to get the cases switched from the civilian justice system to the military one. This is a good thing: While the civilian system is considered to be basically a joke, according to multiple legal experts I’ve interviewed, the military justice wing has managed to eke out a few convictions for mass crimes against civilians over the past few years.

Still, the military justice system leaves much to be desired. In the 2013 trial of 39 Congolese soldiers alleged to have raped at least 76 women in the town of Minova in South Kivu province, for example, only two rank-and-file soldiers were ultimately found guilty. No one at the command level was held responsible because of what one of the magistrates who worked on the case told me was a lack of evidence. That speaks to a dearth of investigative training and resources, something that hasn’t improved much since then, according to legal experts. There is no system for DNA collection in the country, and even if there was, rape survivors are sometimes washed when they arrive at hospitals in a misguided effort to clean them.

But there are reasons to think the Kavumu cases could be successfully prosecuted. The doctors at Panzi Hospital have meticulously documented each rape victim they have treated, preserving all the physical evidence (although a number of the girls never made it all the way to that hospital). Physicians for Human Rights, a United States-based nonprofit, has successfully pushed to have the cases tried as a single mass crime. Despite the lack of resources from Kinshasa, Bodeli has investigated each attack immediately after the fact.

The men in custody have been charged with crimes against humanity, rape, murder, participation in an insurrection, and the assassination of military personnel, Bodeli said. One would hope that the international attention on this case will ensure a proper trial, although it’s not difficult to imagine the blame once again falling on one of the less powerful perpetrators or even bribes being paid to facilitate the main suspect’s escape.

But even if justice is served and Kavumu’s nightmare comes to an end, the victims will need years of psychological and medical support. Their families will also need to find a way to recover a sense of normalcy in a place where homes tend to be makeshift structures that can’t be locked at night. The trauma of the community is profound, and it’s not clear that bringing the perpetrators to justice will be enough to soothe the souls that have been so damaged by this ordeal.

When I was in Kavumu five months ago, the father of one of the victims told me that he doesn’t sleep anymore. “You are scared they will come back to take the kids,” he said. “You have to wake up to touch if the children are there.” One saving grace of what has happened this week, I hope, is that for now, perhaps, he and other parents can sleep soundly for the first time in years.

I don’t know whether this will be true for the little girls. Their nightmare is a part of them, and their bodies, for life.