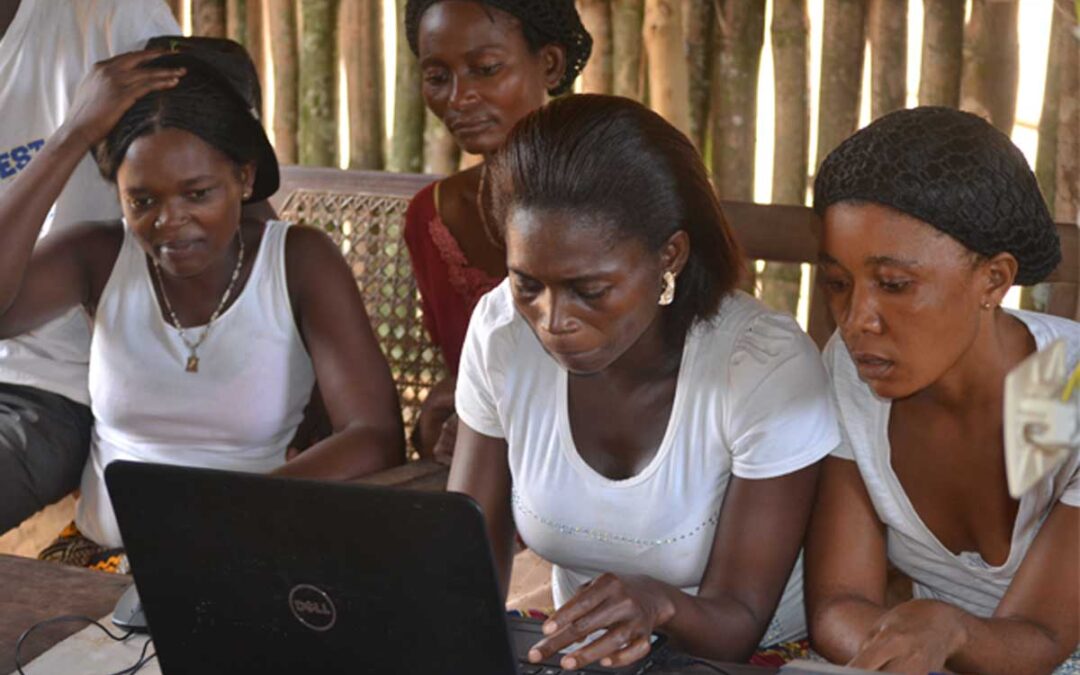 Although exact numbers are unknown, the DRC is widely considered to be the rape capital of the world.

That’s a key reason why Coopera works to empower women and children, including rape victims, in its mission to protect the environment and endangered species near Kahuzi-Biega National Park. Coopera, working with Roots and Shoots, a worldwide service program founded by primatologist Jane Goodall, engages young rape victims in projects such as the planting of trees to provide food sources to wild chimpanzees.

“This we believe [plays a great role in children’s] psychological recovery because they need to be integrated with other kids of the community. But also they have a regular reason to continue with their lives — they become nature’s ambassadors,” explained Itsaso Velez del Burgo Guinea, Coopera’s DRC head of mission. The organization also provides medical attention in rural areas, psychological support through individual or group therapy and socio-economic reinsertion.

“The kids are in the program with us for three years minimum, so we can follow up on their evolution,” explained Lorena Aguirre Cadarso, Coopera’s DRC country director. “[P]arents explain how the girls change. They don’t have nightmares, they don’t cry to go to the school, they have good marks at the school, they are not fearful to go out of the house, they don’t wet the bed, they play more with the neighbors,” — all marks of trauma recovery.

Velez del Burgo Guinea shared the story of one indomitable rape victim, who was kidnapped by rebels for three months and raped every day by different men. Pregnant, she returned home and gave birth. Then 11 armed men raped her again and she was hospitalized for six months. Once released, Coopera trained her as a psychologist support agent for former child girl soldiers. While working one morning, she was raped still again and hospitalized for two more months. Coopera took her in, buying the woman the land she needed to construct a house.

Despite all these challenges, del Burgo Guinea is proud to declare that this woman has become one of the finest chimpanzee “moms” at the Centre de Rehabilitation des Primates de Lwiro, a facility managed by Coopera and two other organizations.

A collective voice for conservation

In the Congo basin, women farm and collect wood and water, and so are the primary users of natural resources, according to Kahlenberg. Thus, she explained, “It is critical that they have a seat at the table in conservation. Women also have their finger on the pulse of their communities so they can advise on what conservation approaches will and will not work.”

GRACE brought female leaders together in a new women’s group that acts as a support network and helps women collectively encourage better environmental practices. GRACE is currently partnering with the women’s group on a project to build fuel-efficient stoves in village homes.

“Pressure on nearby gorilla habitat is coming from people using the forest for their [cooking stove] fuel needs,” Kahlenberg explained. “We aim to cut wood and charcoal use in half by having women switch to stoves that burn more efficiently. This change would directly benefit gorilla habitat and would also greatly benefit [the health of] women and children, who are the most likely to be exposed to indoor smoke [and respiratory diseases resulting] from inefficient cooking fires.”

She also explained that women and children devote many hours each week to collecting and carrying firewood, so the better cook stove initiative could recoup time to be spent on other activities, including conservation. “Cooking is traditionally a women’s activity in this culture, so if this project is to succeed, it must be the women who lead the way,” Kahlenberg said.

Conservation groups are also working across the region to integrate and align women with their conservation goals; one way of doing that is through improved education.

“One of the challenges we face is when girls go through puberty, they’ll miss school because they’re not equipped” with monthly sanitary supplies, said Shawn Sweeney, JGI’s senior director of communications and engagement. In this region, he said, girls may miss up to one third of a school year because of their menstrual periods.

JGI also trains young leaders as peer mentors to help keep girls in school. The mentors identify girls who have dropped out of school and support their return; they also distribute scholastic and sanitary supplies, give presentations and work closely with teachers.

The organization trained more than 700 peer educators, reaching nearly 7,000 young students in Uganda. Peer mentoring has resulted in bringing nearly 600 girls back into school, according to Sweeney.

A young student in Uganda named Lilian, for example, was forced to drop out after the death of her father, which left the family unable to afford necessary items like underwear and sanitary pads. But through the help of her peer educator friend Jerline, Lilian was able to obtain the supplies she needed to go back to school.

“Helping young girls like Lilian finish their education is absolutely critical if JGI is to improve the lives of communities in Africa and preserve the chimpanzee habitats surrounding those communities,” according to the JGI website. “JGI’s Peer to Peer Education Project initiative helps girls complete their education … a key step to increasing the economic stability of communities located near chimpanzee habitat areas.”

JGI has also supported the education of more than 300 girls in Tanzania since 1998 through its scholarship program, which provides girls and women with the resources needed to complete their education. Recipients also participate in Roots and Shoots.

Women, a natural in primate conservation

Bonobos live in matriarchal societies that honor the females, so women’s initiatives are a natural fit for BCI, said Coxe. She also noted that pathfinding women — including primatologists Jane Goodall and Dian Fossey — have played an integral role in great ape protection for many decades.

“They really set a precedent and it’s a case of a lot of women leading in conservation,” Coxe concluded. “Women have a certain affinity with the land and a certain disposition to care for it. Symbolically as well as practically, the woman’s role is important in conservation.”